The George Institute for Global Health and the Climate and Health Alliance (CAHA) have partnered with 35+ health and medical groups in producing a joint letter to Prime Minister Scott Morrison, following the 26th UNFCCC Climate Change Conference (COP26). The letter calls on the Federal Government to scale up international climate commitments to protect the health and wellbeing of Australians and Pacific Island neighbours.

According to the signatories, there is an urgent need to scale up climate action to protect health and wellbeing - and there are immediate and tangible economic benefits with the economic value of avoided ill-health and associated productivity gains from ambitious climate action able to deliver considerable savings for health care and social service budgets.

The Joint Letter calls for four key actions from the Federal Government to:

See quotes below or for media interviews please contact Remy Shergill on 0423 075 895.

“Over 50 nations committed to embed climate change considerations in their domestic health policies at Glasgow - Australia is increasingly out of step with the rest of the world; not just on climate policy in general, but in how it responds to the growing evidence of the impact of climate change on people’s health. The majority of countries now also include health in their national climate plans to the Paris Agreement. As one of the most climate vulnerable countries in the world, Australia must prioritise health protection from climate change just as it has done from COVID - this starts with putting health at the centre of the national adaptation plan, but must include supporting our climate-vulnerable neighbours with funding to respond to now unavoidable harms from climate change.”

“Climate change and human health are inextricably linked. The Australian Government needs to take this seriously because a worsening climate will cause more disease and injury, health systems will struggle to cope and the inequalities in our society will grow. We need decisive leadership that embeds health into climate action.” 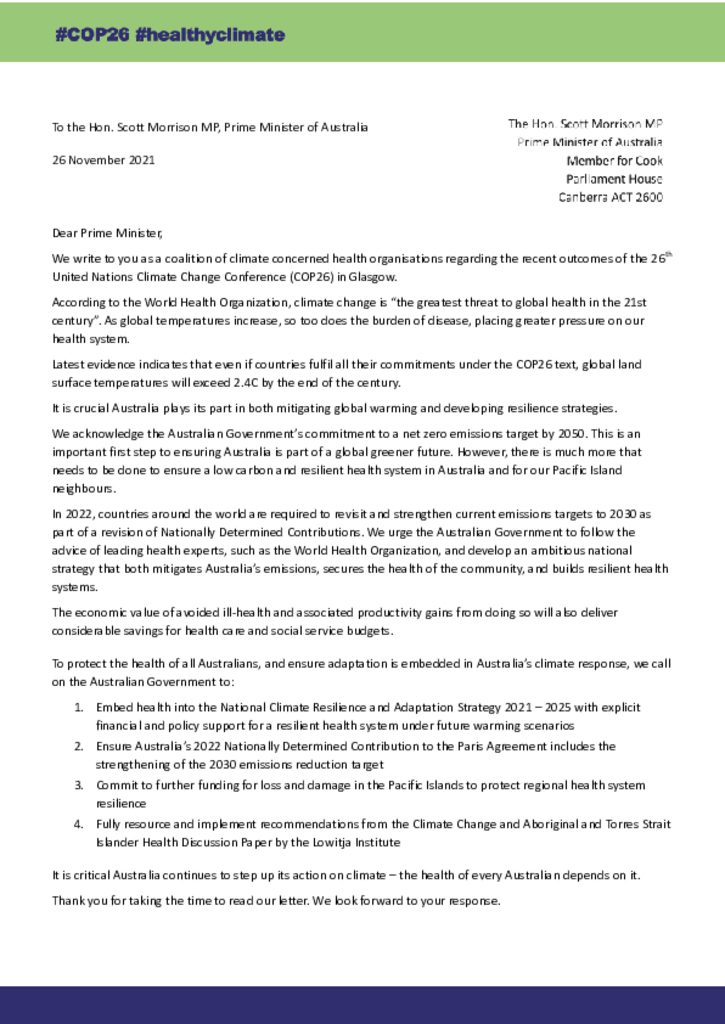