The University of Hong Kong (HKU) and The George Institute for Global Health have launched the FoodSwitch app which reveals how healthy or unhealthy a product is just by scanning its barcode with a smartphone.

It highlights the fat, salt, sugar and energy content through a colour coded, traffic light system – unhealthy products flash up as red, healthy products are marked green and middling ones flash up as amber. The free tool offers up a healthier alternative when available.

The new food app will help consumers choose healthier food and drinks in the supermarket – at a glance.

FoodSwitch was launched in Australia in 2012 and has been downloaded more than 650,000 times. It is now up and running in India, the UK, New Zealand, South Africa, China and America.

Professor Bruce Neal, of The George Institute for Global Health, said FoodSwitch is about empowering shoppers to follow the healthiest diet possible. “We know that food labels can be really hard to understand. But, if you see a red warning pop up highlighting a product is high in salt, sugar or fat, it’s much easier to put it back on the shelf and opt for a healthier option.”

Dr Jimmy Louie, Assistant Professor in Food and Nutritional Science at the HKU School of Biological Sciences, added that FoodSwitch would help address the obesity epidemic in Hong Kong. “More than half of adults in Hong Kong  are now overweight or obese and we believe that’s largely because of the foods they are being increasingly exposed to. More and more people are eating processed foods which are laden in sugar, fat and salt. If we can cause consumers to stop and think, that we hope will lead to the food industry to start making healthier foods.”

The WHO recommended daily salt intake is just 5 grams  of salt or less a day, yet Hongkongers are estimated to be eating up to double that amount.

Dr Louie said: “It’s not the salt we use whilst cooking that is the biggest source of salt in our diet; it’s the hidden salt in processed foods including cereals, soups and dim sum that is pushing up our daily salt intake to very worrying levels. Salt is the one of the biggest contributors to high blood pressure, a risk factor for stroke and heart attack.”

Consumers will also be able to take part in a crowdsourcing campaign to expand the FoodSwitch database. If they scan a product not in the database, they will be prompted to take a photo of the food item so it can be checked and added to FoodSwitch.

Professor Neal said the FoodSwitch team in Australia worked with supermarket giant Woolworths to reformulate their own brand products and have reduced salt by 30% from their ready meal range. A trial also saw people with cardiovascular disease reduce their daily salt intake by 0.7 grams by modifying their shopping habits through FoodSwitch.

“We will constantly be adding in products into the database so that we can keep a watchful eye on Hong Kong’s food supply. Our researchers will identify the unhealthiest products and work with the food industry to deliver products lower in salt, sugar and fat.” He added.

FoodSwitch can be downloaded for free at App Store for iPhone or Google Play for Android. 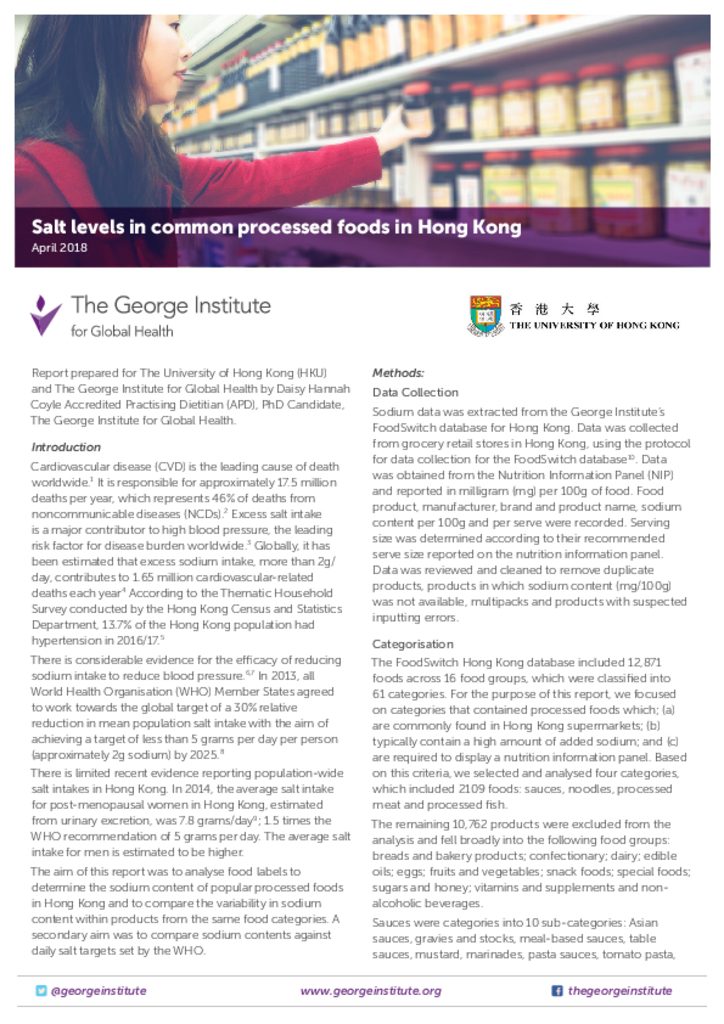