The world’s first international polypill trial has shown that a four in one combination pill can halve predicted heart disease and stroke risk. Results were published today in the open access journal PLoS One.The once-a-day polypill contains aspirin and agents to lower blood pressure and cholesterol.

“These results show a halving in heart disease and stroke can be expected for people taking this polypill long-term” said Professor Anthony Rodgers, of The George Institute for Global Health.

“We also know from other trials that long-term there would be a 25-50% reduction in colon cancer, plus reductions in other major cancers, heart failure and renal failure,” he said “these benefits take several years to ‘kick in’, but of course one of the hopes with a polypill is it helps people take medicines long-term”

Associate Professor Anushka Patel, of The George Institute for Global Health noted, “Previous studies could not measure polypill side effects reliably, which is really important”

“This trial was reassuring in that we did not see unexpected problems. We did show previous studies had underestimated polypill side effects considerably - in the short-term about one in six people have a side effect. Most were mild but about one in 20 overall stopped treatment due to side effects”

“Dr Reddys Ltd are the perfect company for this initiative” said Professor Rodgers “they overcame the substantial formulation challenges and also demonstrated a commitment to pricing for affordability. Right from the outset their plan was for the pill to cost only a few dollars a month in developing countries. A focus on quality and affordability will drive high volumes, ensuring both public health impact and financial sustainability”

The polypill will be available in India soon and then elsewhere within a year or two, after regulatory approvals are obtained.

The authors noted that the benefits, while large, were not as massive as researchers first suggested, and the side effects were also not as rare as first thought - indicating treatment is best targeted to those at raised risk

“This heralds a more balanced, measured approach than the initial hype around the polypill” said Professor Otavio Berwanger, Hospital do Coração, Sao Paolo.

”This polypill won’t reduce heart disease and stroke by 80% as previously reported, it can achieve a 50% reduction.

“It is not a panacea. It is a really promising part of an overall package that should include measures to tackle the major causes of heart disease and cancer ie. smoking, poor diet and physical inactivity,” said Professor Berwanger.

The trial tested the effectiveness and tolerability of the polypill in 378 people with raised cardiovascular risk, who did not necessarily have high blood pressure or cholesterol. The participants came from Australia, Brazil, India, New Zealand, The Netherlands, UK and the USA.

“The recently demonstrated reduction in cancer risk from low-dose aspirin makes a big difference to the relevance of these results” said Professor Simon Thom, of Imperial College London.

“In the last six months it has become clear that aspirin will halve colon cancer deaths and reduce oesophageal, pancreatic, brain, lung, stomach, colorectal, and prostate cancers, although these benefits are only seen after five to ten years,” said Professor Thom.

Many doctors are still uncertain whether these medicines are best provided in the form of a polypill, or as separate pills - this question is the subject of a series of ongoing trials conducted by this group.

“The World Health Organisation have reported that scaling up access to effective cardiovascular medications would by itself get most of the way to reaching the WHO goals for reducing non-communicable diseases” said Professor Srinath Reddy, of the Public Health Foundation of India.

“These results show the polypill could be an affordable part of that goal”, noting that the United Nations will be holding a special Summit on Non-Communicable Diseases, in September this year.

1. This study was funded by the Wellcome Trust, the Health Research Council of New Zealand, the National Heart Foundation of New Zealand, the National Health and Medical Research Council of Australia, The Brazilian Ministry of Health and the British Heart Foundation.
2. The polypill was manufactured and provided by Dr Reddys Ltd, Hyderabad.
3. The trial was run by an independent research group, and sponsors had no role in the design, conduct or analysis of the trial. The collaboration has now extended to form the Single Pill to Avert Cardiovascular Events (SPACE) group.
4. Heart disease, stroke and other types of cardiovascular disease kill 17 million people per year globally. 80% of these deaths are in developing countries.
5. Dr Ted Bianco, Director of Technology Transfer at the Wellcome Trust, commented: "Few of us would dissent from the view that prevention is better than cure in most matters medical.  It is good news, indeed, to see the evidence base grow for the potential use of a new generation of combination products as a safe and affordable option in the battle against heart attack and stroke." “It now is a decade since a WHO and Wellcome Trust conference, instigated by Sir Richard Peto, first debated the promise of combination cardiovascular pills. Surely we should be able to get simple, affordable products developed and tested quicker than this?” asked Richard Grimm, of The Berman Center, Minnesota “Especially for the world’s leading cause of premature death and disability”.
6. “The individual medicines in this polypill have been tested in clinical trials involving over a hundred thousand people over the last few decades, so we can be confident of the overall long-term benefits on major events.” said Rick Grobbee of The Julius Centre, The Netherlands.
7. Raghu Cidambi of Dr Reddys Ltd noted the similarities with the well-publicized Gartner Hype Cycle. “We started this public-private partnership just before the "Peak of Inflated Expectations"; it was a very challenging product to make to international standards but we continued through the "Trough of Disillusionment" thanks to the ongoing support of Dr Anji Reddy; I believe we are now on the "Slope of Enlightenment" and looking forward to the "Plateau of Productivity
8. "The Hype Cycle is a graphic representation of the maturity, adoption and application of technologies, observed across a range of different sectors. The peak year of media publications on the polypill was in 2003, when the term was coined in a paper entitled “A strategy to reduce cardiovascular disease by more than 80%” 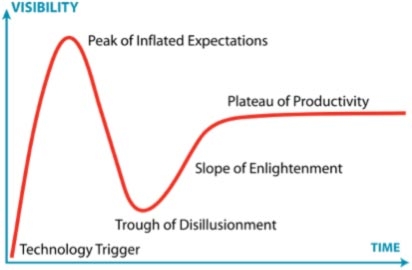