A new report commissioned by The George Institute for Global Health estimates that the total annual cost of sepsis in Australia is $4.8bn with direct hospital costs accounting for $700m a year. This compares to direct hospital costs of $642m for breast and lung cancer combined, according to the latest figures from the Australian Institute of Health and Welfare.

The George Institute’s Prof Simon Finfer, past chair of the Council of the International Sepsis Forum, and Vice President of the Global Sepsis Alliance said that just a small reduction in cases could generate millions of dollars in savings.

“Despite the fact that more than 18,000 Australians are treated for sepsis in Intensive Care each year and as many as 5,000 of these will die, awareness of sepsis is low compared to other conditions that are less costly for hospitals to manage,” he said.

“Given that four in five cases start outside hospital, being able to recognise the point where a seemingly simple infection is developing into life-threatening sepsis is crucial, as accessing the right medical care quickly is vital to minimising the significant long-term consequences.”

Sepsis is the immune system’s response to infections that can originate from bacterial, fungal, or viral sources. It is a time-critical medical emergency that arises when the body’s response starts to damage its own tissues and organs, leading to shock, organ failure and death if not recognized and treated promptly.

Of those who survive, many suffer what is known as post-sepsis syndrome which leaves around half with impaired physical and cognitive function, and for some serious life-long disability, placing a considerable burden on sepsis survivors and their families.

Released to mark World Sepsis Day, the report found that direct hospital costs, while considerable, account for around only 14 percent of the total cost of sepsis to society, with the rest attributed to lost productivity while patients were hospitalised, and due to premature death.

With leading global experts recently recognising that patients critically ill with COVID-19 have viral sepsis, the picture is likely to look much worse as the global pandemic progresses.

“Even in pre-COVID terms, these estimates are conservative given that they don’t include lost productivity due to recovery and rehabilitation at home following a hospitalisation for sepsis,” said Prof Finfer.

“Our previous research has shown that while six in ten people surveyed had heard of sepsis as a medical condition, less than a quarter were aware of any of the symptoms. If we could reduce just a small proportion of cases, the money saved could be put towards improving awareness and recognition, improving clinical practice and treatments, and providing post-sepsis support for survivors,” he added.

Adelaide-based grandmother and former business owner Lyn Whiteway knows all too well the devastating consequences of sepsis, after a painful leg infection turned into life-threating sepsis within hours, leading to almost a month in hospital followed by a long recovery.

“After being released from the local hospital Emergency Department, my husband took me to a different hospital on the advice of our GP. The doctors there told me that had I come in 24 hours later I would be dead. It was a very sobering thought,” she said.

“I had never heard of sepsis before this happened to me. Now I know it can happen to anyone. If more people knew about sepsis, they wouldn’t have to go through the same experience as me. My advice is to make sure you know the signs – this could happen to you or a member of your family at any time – and get medical help immediately. Don’t just wait to see if it gets better – ask yourself ‘could it be sepsis?’ It could save your life."

My advice is to make sure you know the signs – this could happen to you or a member of your family at any time – and get medical help immediately. Don’t just wait to see if it gets better – ask yourself ‘could it be sepsis?’ It could save your life.

Cost of sepsis in Australia 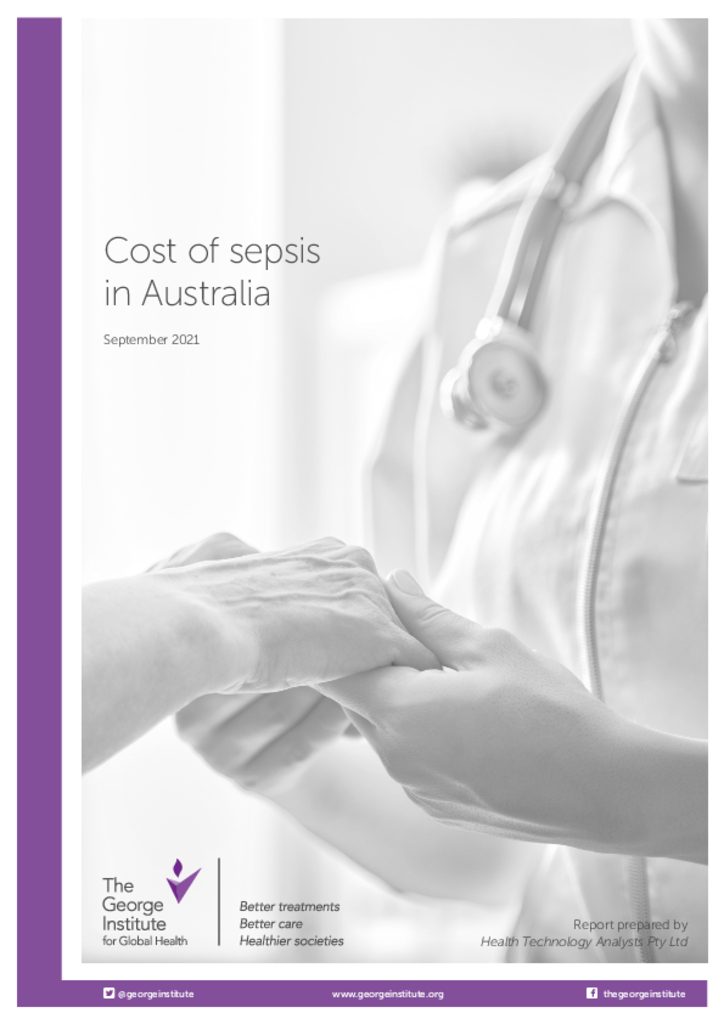