Aim: Despite Immunoglobulin A Nephropathy (IgA nephropathy) being the most common cause of end-stage kidney disease in young adults, few studies have examined regional differences around the world, and current treatment guidelines are based on trials without a uniform approach or adequate sample sizes - especially for individuals with a high risk of kidney progression. Corticosteroid use in IgA nephropathy has been widely used for decades, despite a significant gap in evidence for dosing and duration of this therapy. As a result, there is significant regional variability and clinical uncertainty regarding corticosteroid use in IgA nephropathy.

Method: With 70 participating sites, TESTING is a multicentre, double-blinded RCT involving investigators and participants from Australia, Canada, China, Hong Kong, India and Malaysia. In November 2017, the study was temporarily halted due to high levels of side effects among participants receiving corticosteroid. However, an interim analysis found clear signals that corticosteroid may prevent individuals with IgA nephropathy from developing renal failure. The study protocol was modified and recruitment recommenced.

Impact: TESTING aims to resolve persisting uncertainties regarding corticosteroid as a therapy for IgA nephropathy. Trial outcomes will provide the most robust evidence for clinicians on the use of corticosteroid (duration and dosing) and potential side effects. This evidence will help consumers make an informed choice on corticosteroid therapy and guide joint decision making. TESTING results will change international guidelines on the management of IgA nephropathy.

Project Update:The trial successfully randomised its target of 503 participants in November 2019 becoming the largest randomised controlled trial in IgA nephropathy in the world to date. As it is an event driven trial, these subjects will be follow up until the pre-defined composite primary endpoints of 40% eGFR reduction, end stage kidney disease and death due to renal causes, are accumulated. These are hard renal endpoints that will determine if treatment with corticosteroid (or not) will prevent individuals with IgA nephropathy from developing renal failure.  The major side effects of corticosteroid therapy will also be collected during the study. At the end of study, TESTING will provide robust and most current evidence on the net benefit/ harm of corticosteroid in IgA nephropathy. 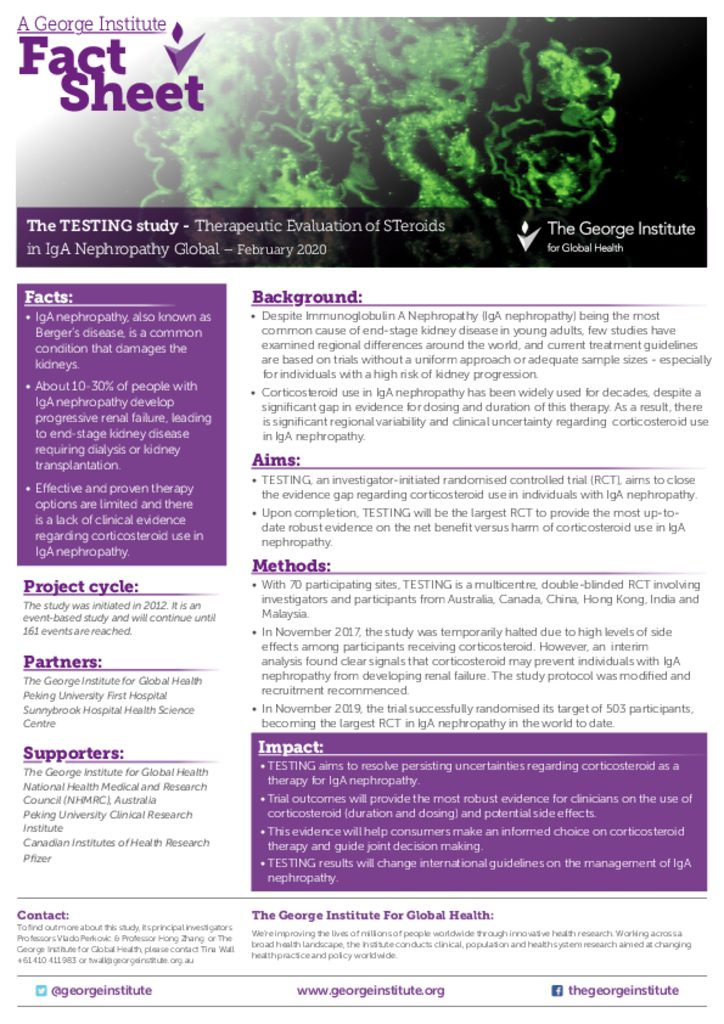